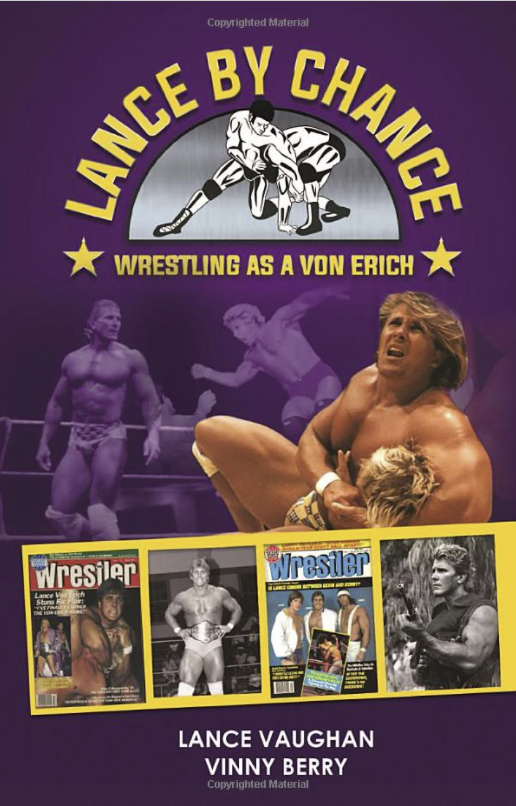 For years, Lance Von Erich has been one of the great enigmas in the pro wrestling world - an ill-fated effort to artificially create a cousin for the All-American heroes of World Class Championship Wrestling. Arriving on TV out of the blue in October 1985 having never been mentioned by anyone in the family previously, Lance had the body of a Greek Adonis and quickly joined his “relatives” in becoming idolised by fans. His job was to replace their brightest star David after his tragic death and, despite a relative lack of in-ring experience, Lance did his best to fill that void for over 18 months. Then, just as suddenly as he had appeared, he was gone again, disowned by patriarch Fritz on international TV and never seen again.

What on Earth happened, and why had Lance Von Erich seemingly disappeared off the face of the Earth? For many years that tale remained untold, until author Vinny Berry was able to track him down and finally persuade him to tell his life story. Thank God he did, because the resulting book is an absolute triumph. ‘Lance By Chance’ feels less like reading an autobiography and more like sitting at a bar with Lance while he tells you a string of remarkable anecdotes from his life in World Class and beyond.

Decades removed from his journey through the wrestling world, Lance does not seem to have any major axe to grind, aside perhaps from responding to a few stories from former colleagues and fans where he has been painted as the villain: in particular, he gives his version of events surrounding his infamous premature departure from a tour in Japan for which he has been roundly criticised, and explains why he ultimately decided to stop working for the Von Erichs. Some of this will be controversial, and others who were involved may well dispute his account, but at least he has now had his say.

In any event, Berry has done a phenomenal job in compiling the many memories that Lance has shared with him and capturing the essence of the era in which the story took place: a hedonistic and seemingly lawless age where wrestlers lived like rock stars. There is no shyness here - we get unvarnished accounts of everything from drug abuse to sexual exploits, from hilarious road stories to unspeakable tragedies, and along the way we are offered insight into the many colourful characters who are synonymous with that era in wrestling history. Even for those who are not familiar with the Texas territory there are cameos to enjoy from several future WWE stars including the Ultimate Warrior and Jake “The Snake” Roberts. Perhaps most unexpectedly, Lance’s life after wrestling was almost equally wild and involves stories of smuggling auto parts across the South Africa-Zimbabwe border, being arrested for arms trading in London, and surviving a train bombing in India.

This is the kind of book that is such a page-turner that it can almost accidentally be read in one sitting despite being well over 200 pages in length. For the general reader it is filled with jaw-dropping escapades from an extraordinary life, told with a frankness that feels refreshing. For wrestling enthusiasts specifically, will it answer every remaining question about the rise and fall of the Von Erichs? Of course not, but nothing ever could. Nonetheless, it will finally fill in many of the gaps about the man behind one of wrestling’s most enduring myths - and in this case the real story is every bit as remarkable as fans had dared to imagine. Highly recommended.

Fans in the UK can buy 'Lance By Chance' at Amazon UK here. Vinny Berry kindly provided a copy of the book to me for review purposes.